Day 6 was our last official day in Disney World. The next day we would be up at 4am to catch our flight back to New York, but we didn’t let that stop us from making the most of our last day! 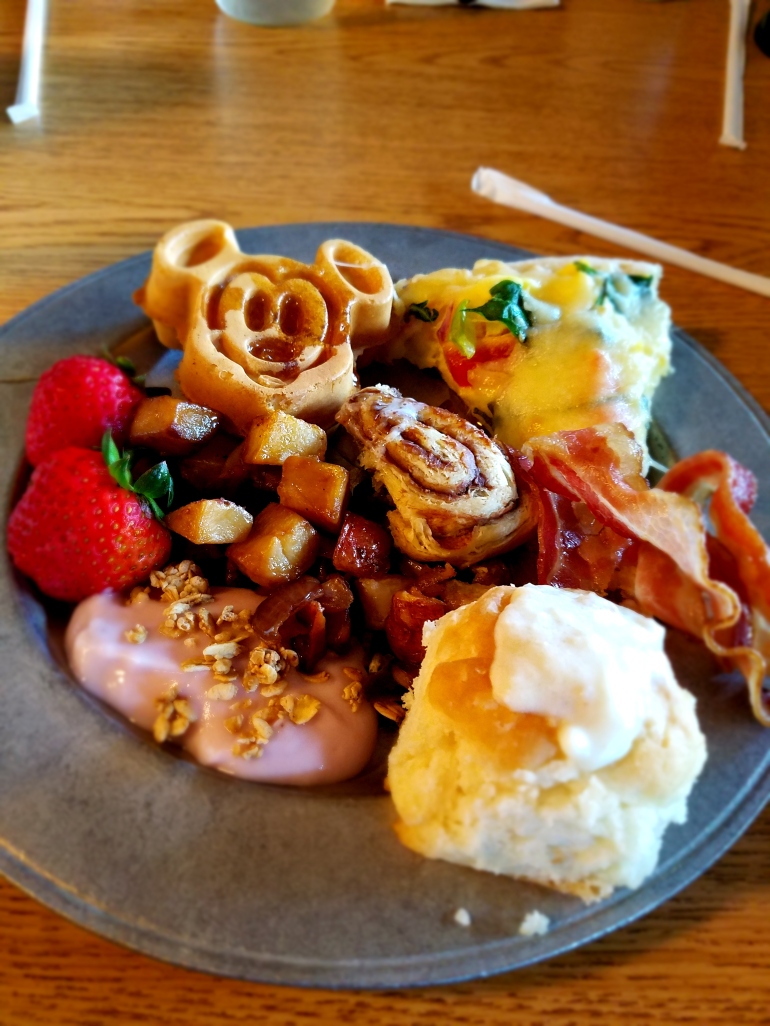 We decided to sleep in a little and then head over to Trails End for our final breakfast. It’s a buffet and Tom seriously took advantage! Check out his full plate! Our waitress was so sweet and she had us tell the tale of our engagement. Again, it’s these little touches!

Once stuffed, we hopped the boat to the Magic Kingdom. It’s the perfect place to spend the last day. Of all the parks, it’s full of the most enchantment.

We wanted to spend the day taking it easy and just enjoy the Magic Kingdom. We started out with our first FASTPASS at the Jungle Cruise. 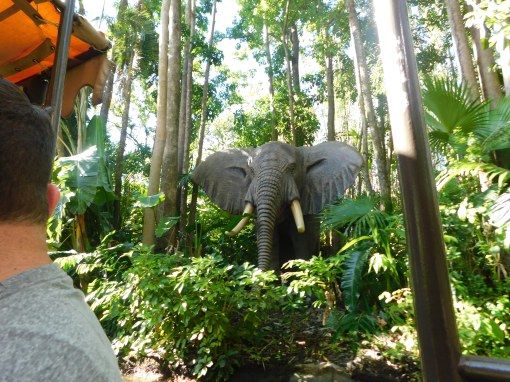 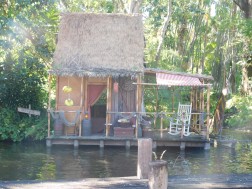 This Disney classic just fills us with so much joy! The puns make you laugh and the backside of water makes you oooh and aaaahhh!

After, we stopped to people watch in Adventureland. It was nice to just take it easy. 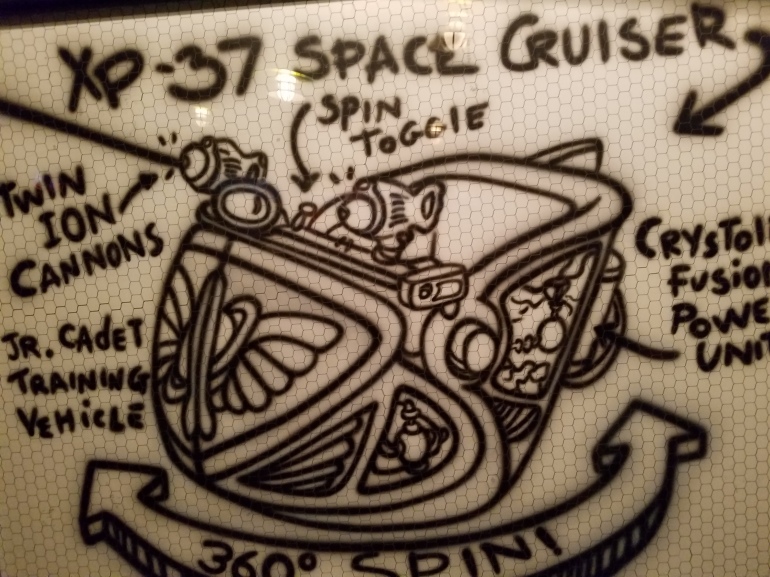 Our last FASTPASS was for Buzz LightYear Space Ranger Spin. Tom totally kicked my butt, but I swear my ion cannon’s button was stuck… 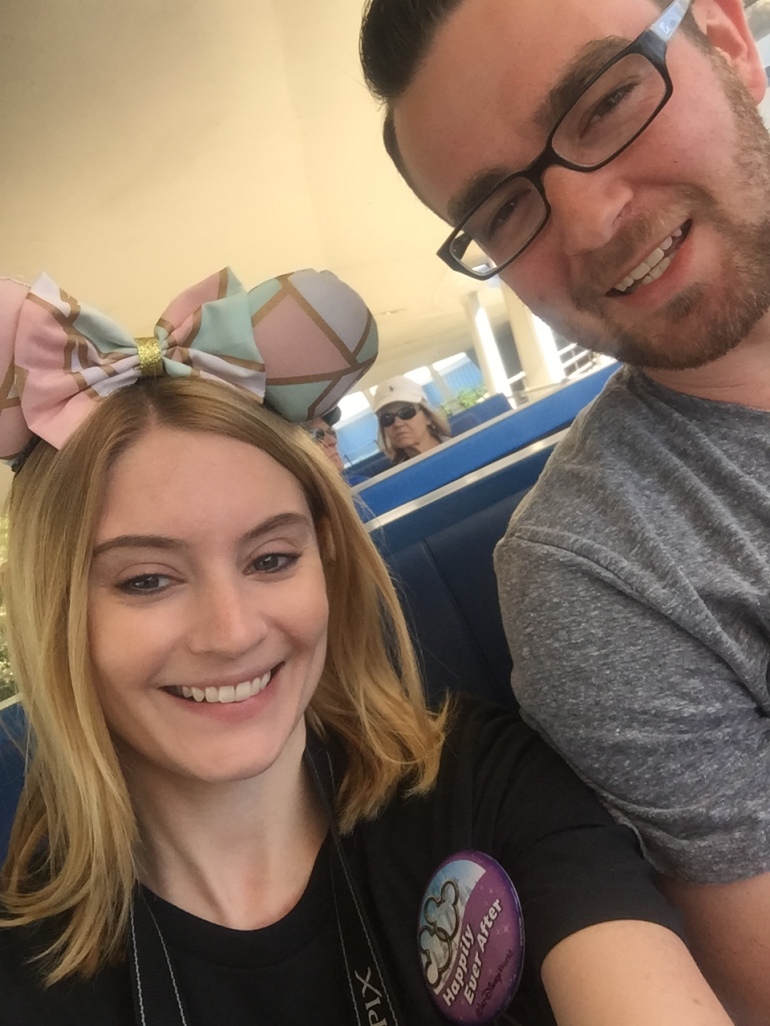 While in Tomorrowland, we rode the People Mover (TTA) and waited on what we thought was a short standby line for Space Mountain, but 70 minutes later I was able to have one more Disney photo shoot.

Every Disney girl needs her picture taken at the purple wall! I’m not sure which wall is my favorite yet, but they sure do make for good instagram pictures. My shirt and ears are from Neverland Threadss on Etsy. 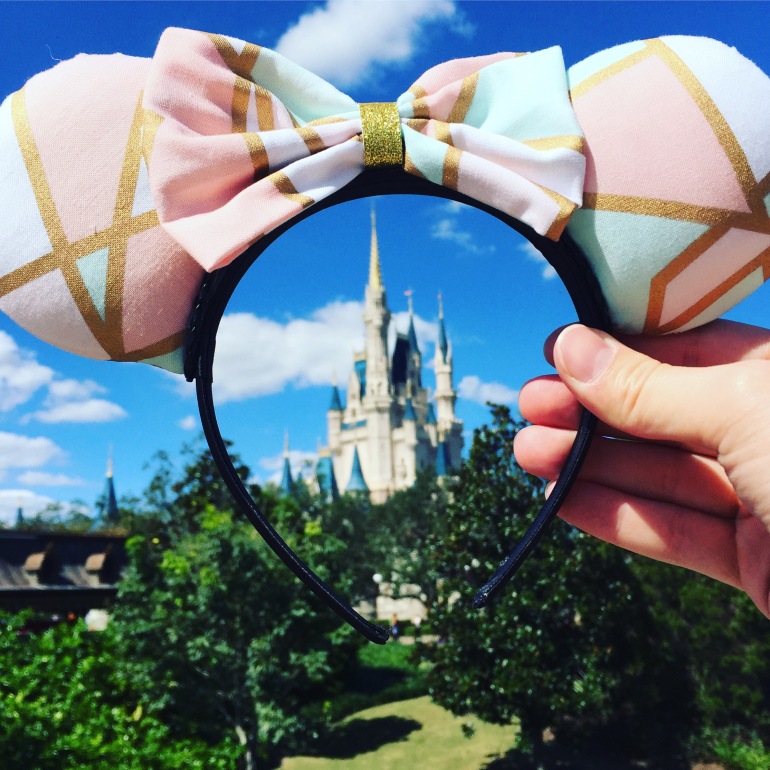 Next up, lunch! We opted to share the amazing corndog nuggets from Casey’s on Main Street.

The rest of our day in the Magic Kingdom was spent shopping and admiring all the fall/Halloween decorations. 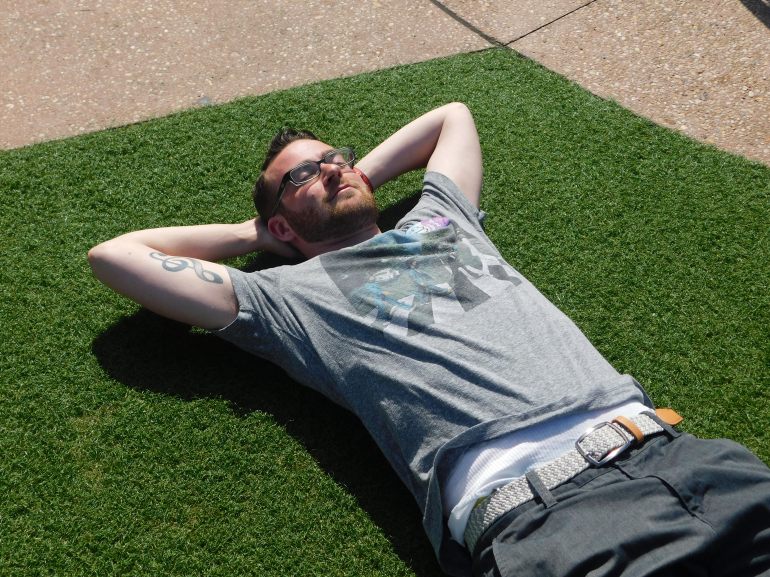 We even spent some time on the hub grass, Tom’s favorite place to relax. This central location of the Magic kingdom is my favorite it’s absolutely beautiful. 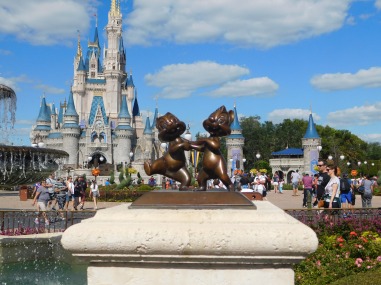 I had to fit in one last Dole Whip before we left. This year they brought back the swirl! Pineapple Dole Whip swirled with vanilla ice cream. It’s perfection and bigger than my head!

We were able to catch a good portion of Festival of Fantasy before heading back to Fort Wilderness.

This picture was us saying goodbye to the Magic Kingdom.. see ya real soon! 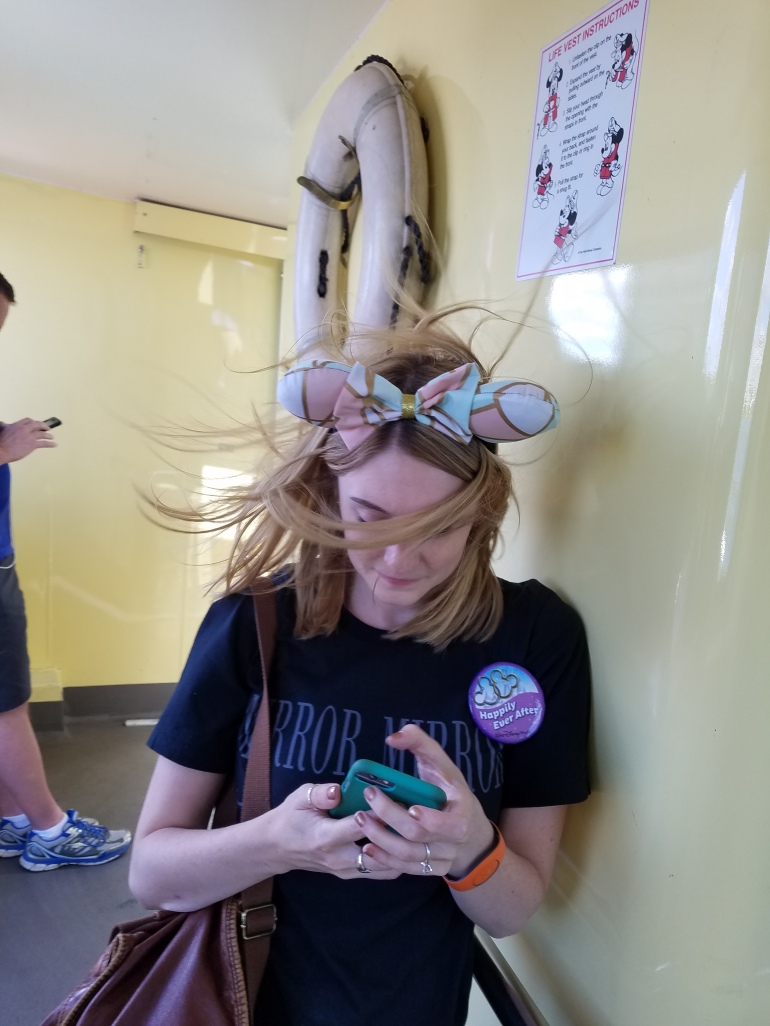 On the boat ride back, Tom finally got a picture of me while I wasn’t paying attention just like our last trip. It was so windy!

Back at Fort Wilderness, we got a snack and hung out by the pool. We played name that TV Show Theme Song and totally destroyed the competition (which were kids..). I admit it, I get very competitive and, in all fairness to me, these kids had never even heard of half the TV shows.

For dinner that night, we went to EPCOT. We spent a little time shopping and then went over to the Coral Reef Restaurant.

I have always wanted to eat here since I was a little kid. The restaurant was featured on both Full House and Boy Meets World, so Tom was equally as excited! This is where Cory and Topanga got back together and Danny Tanner almost proposed to Vicky! 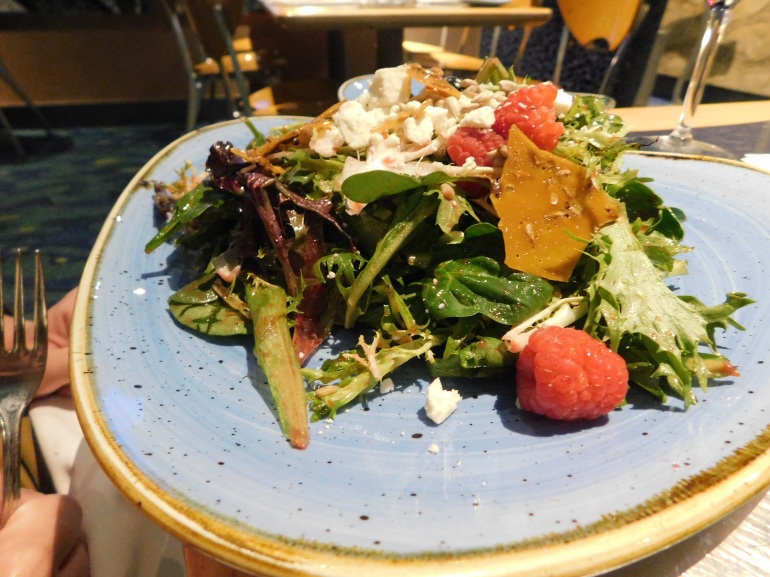 We all started with the Seasonal House Salad, Mixed Greens, Raspberry Vinaigrette, fresh Berries, Feta Cheese, Sunflower Brittle. Tom and I weren’t the biggest fans. We found it to be too sweet, but my family really liked it. 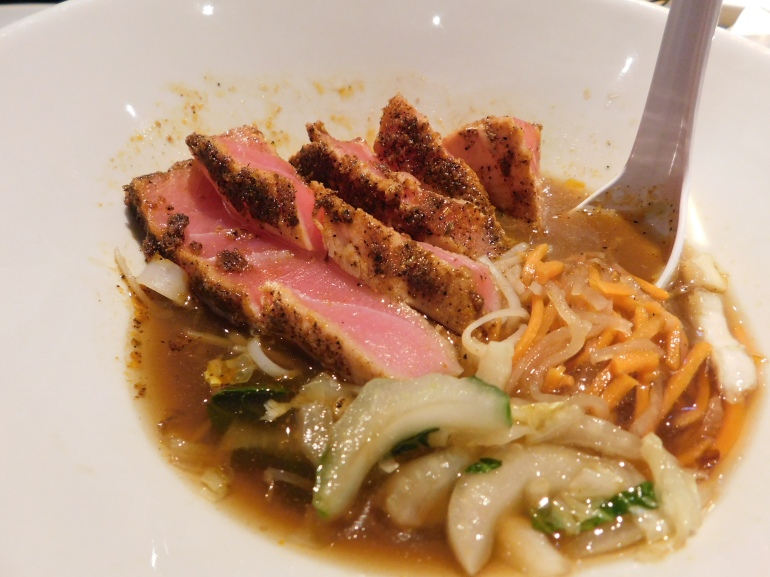 For my entree, I had the Tuna Bowl (3rd day of tuna), Spice-crusted Rare Tuna, Rice Noodles, Bok Choy, Napa Cabbage, Sesame Oil, Shiitakes, Pickled Vegetables, Ramen Broth. It was really really good, though the tuna could have been a little more tender.

Tom ordered Seared Mahi Mahi, Jasmine Rice, Coconut-Lime Sauce, Avocado-Mango Salsa. He enjoyed it so much that he dug in before I could get a picture.

Coral Reef gets 3.5 out of 5 stars. I’m happy I finally got to experience it, but it definitely was our least favorite dinner from the trip. 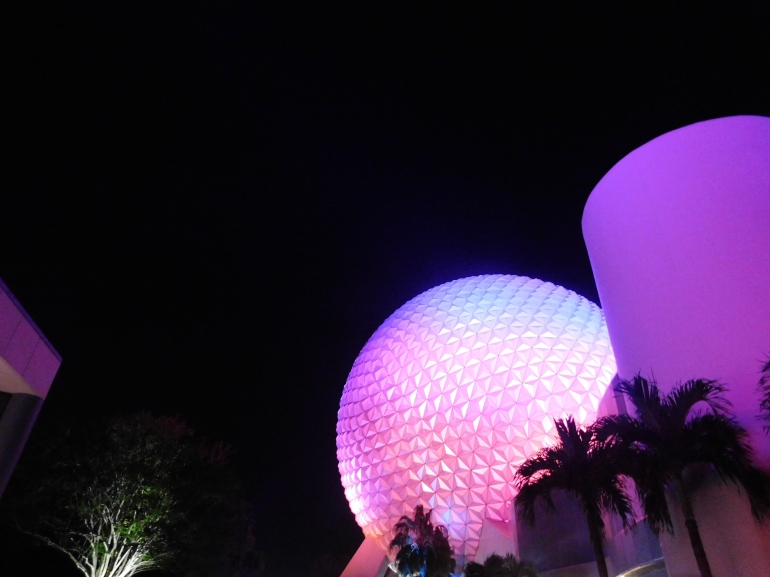 After dinner, we took one final stroll through future world before saying goodbye to EPCOT.

The next day we boarded our 9am flight and headed back to Astoria. As of right now, it’s going to be a couple of years before we return and we will miss Disney so much, but we will be back one day for sure.